Last summer, I was invited to my friends’ wedding at the Shaughnessy Golf And Country Club.   Much like today’s weather, it was hot and sunny.  They had a lovely late afternoon ceremony on the lawn by the clubhouse surrounded by the beauty of a natural setting with green grass, tall trees and waterways.  After the ceremony and group photos, guests were welcomed into elegantly decorated reception hall.

Let’s pause here for a minute as I flip back in time to a few weeks before the wedding.  Prior to the wedding day, I met up with the bride and groom for lunch.  We discussed various wedding day arrangements and somewhere in the middle of the conversation, the bride asked me to help her with something.  Sure, if it’s something I can do, no problem!  I must admit I was a bit surprised by her request and even thought she was kidding when she first asked me.  She wanted me to take pictures of all the food before anyone else touched it.  Not a particularly challenging task (as long as the servers knew I was going to be poking around in their territory) but I was just surprised that she wanted me to take pictures of the food.  After all, they have a professional photographer and probably many friends with cameras that are lightyears ahead of my hot pink camera!

The bride brought up a good point.  She wanted to have pictures of the food before people started digging into it.  I was sold on that point already so when she told me she liked the photos on my blog, well then… of course I’d say yes!  hahaha… In fact, I was thrilled that she asked me to take the photos of the buffet food.  It gave me a good excuse to snap some shots of the spread while it was untouched.

On the wedding day, I quickly explained the bride’s request to the serving staff and assured them that I would stay out of their way while they brought out the food.  I checked in with them to find out when they would be placing the food (cold foods and then hot foods).  As it turned out, the emcees misunderstood the time that the buffet would be ready.  When the emcees mistakenly announced the buffet table would be ready in 5 minutes, the servers went into fast mode to bring out all the food.  After the emcees were advised of their incorrect time frame, the guests were then distracted by various games and activities.  The servers were still in “fast mode” and it was amazing to watch them work as I quietly stood off to the side.  Very impressive! 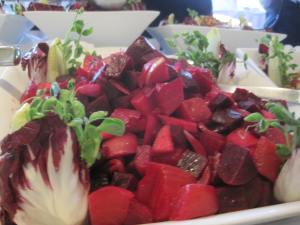 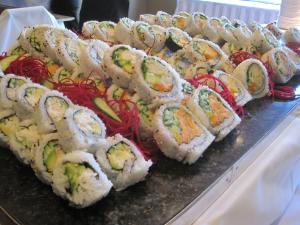 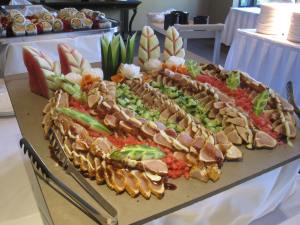 I tried to stay out of their way as much as possible until a dish was set up, ready and the servers had moved onto the next item.  I would then step up to the dish, aim my camera at the food and snap a shot or two.  Each time I stepped up to the table was for less than 15 seconds.  For me, I wanted to take the food photos without getting in the way of the servers bringing out another item or interfering with the time pressures that they were dealing with.  Because the lighting on that side of the room was good, my photos turned out better than I thought.  There was one time one of the female servers thought I had forgotten to take a photo of one of the platters and waved me over.  I assured her that I had already captured that platter and not to worry.  She was surprised that I had already taken the photo.  I thanked her then explained to her that I didn’t need much time as the photo was already taken when she had turned away to reposition a neighbouring platter.  She smiled and nodded before carrying on with her tasks. 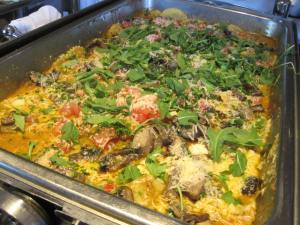 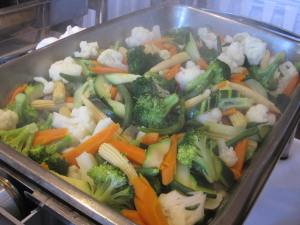 As the rest of the hot foods were brought out and the games and activities were slowing down, some of the other guests came over to take pictures of the food as well.  I felt a little sorry for the servers who were still trying to get the food on the table but then had to either wait or try to manuever around the guests who were standing in the middle of the aisle to take their photos.  Thankfully I had already completed most of my photos and had done so with minimal interruption or inconvenience of the servers.  In fact, they were all quite friendly to me and one of them even offered to open the hot food item covers for me in case I didn’t catch a photo.  I told him I already took my photos and thanked him. 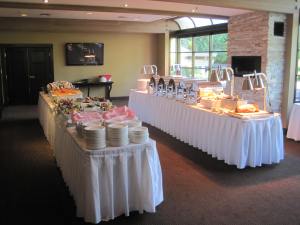 In record speed, the buffet tables were ready and dinner was served!  As friends of the bride and groom, our table was one of the last few to get our food.  Even then, there was lots of food on the buffet table.  We each came back with two plates, one hot and one cold.  Look at our spread! 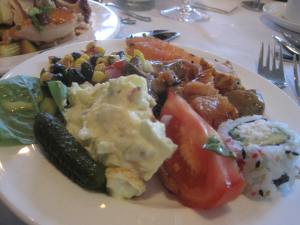 my plate from the cold table

my plate from the hot table

our table… SO much food!

The food was fantastic!  I preferred the cold food items more than the hot food items… but I think the weather had a part in that craving.  My appetite is much smaller in hot weather and the cold foods tend to look more appealing as well.  I also heard that the desserts were amazing so I made sure to leave a little bit of space for dessert.  Thank goodness I did…. 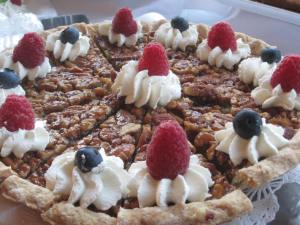 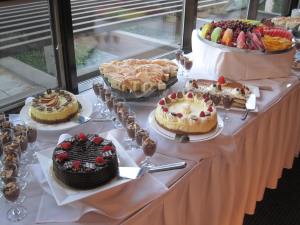 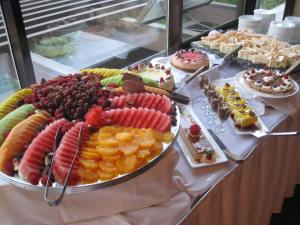 If you’re wondering … does the dessert taste as good as it looks?  Oh yes!  More so than you can believe!  Dessert was phenomenal!  The presentation was impressive and my photos do not do the set up any justice.  I should also mention here that the servers were very kind to me.  They recognized me from round one (the dinner buffet table) and when they were done most of the set up, one of the servers asked me if I had a chance to take some pictures of it yet.  There were other guests hovering to take photos but I was given that extra special attention.  Maybe it helped that I had told them in advance that the bride wanted me to take photos… 😉

These are the desserts I tried… so delicious.  I wonder if I have any friends left to get married and who might be looking for a wedding venue… I have a venue to suggest….  😉 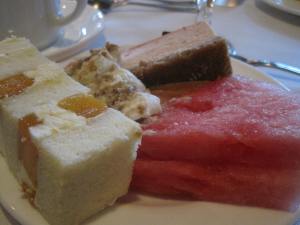 1 thought on “Yummy Food at my Friends’ Wedding Reception”