It’s been 7 weeks since I last blogged — sat down and hammered something out on the laptop.  I did turn my mind to blogging several times…  but I only got as far as turning my mind to it and nothing further.  Between a month of deadlines and changes at work as well as my current knitting frenzy, I let my blog fall to the sidelines.  Oops… And somewhere in the last two months, my blog turned two.  Happy belated 2-years, blog!

Tonight I’m taking a break from knitting and instead I’ll do some blogging.  Looking at the calendar, it’s been one year since my Australia trip.  (…and as a random side note, a year since I cut my hair…)  Shortly after Australia was my Whistler  trip …which means that with all the pauses and procrastination, I’ve fallen behind by almost a year (and I don’t want to disappoint Nibbles)!  I’d better get writing…so back to Whistler and November 2012 we go…

While it may seem like my first night at Whistler ended with a meal and some photos, that only tells half the story.  I should mention that I’m not usually a shopper yet (somehow) the big sale signs in the storefronts lured me in.  I only stopped by two stores but in just over an hour, I spent “a lot” of money.  I found exercise pants and jackets at Roots for my running outfit.  I also purchased a warm and cozy leather jacket at the Danier store next door.  Although I whine and complain about spending a lot of money in such a short time, I know those were some of the best deals and most useful purchases last year.  Well, those and my Icebreaker shirts.

Realizing that wandering in stores with sale signs is a dangerous activity (for my wallet), I decided to go back to the hotel (Delta Whistler Village Suites) and check out the gym.  I spent the next hour on the treadmill and was quite proud of myself for running while on vacation.    Although… almost running into the wall after stepping off the treadmill was not very cool.  Thankfully there was no one else in the fitness room.  I now understand why people end off their workout with some walking.

I slept well that night. It was probably a combination of inadequate sleep the night before (last-minute packing), tail-end of jet-lag and running for an hour.   Waking up the next morning, I felt refreshed and ready to eat again.  Thankfully B had already picked out our brunch and dinner places and all I had to do was follow her around.

It was a very chilly morning but we decided to walk over to brunch.  Where did we go…? Crêpe Montagne.  I took these pictures on the way over…

Luckily we arrived before the rush and were quickly seated.  Crêpe Montagne’s breakfast menu had options for eggs benedict, omelettes, waffles, pancakes, eggs & toast as well as savoury or sweet crêpes.  We were at a crêpe place so I decided to try their crêpes.  B’s friend ordered a gluten-free Tomatoes Egg Benedict, B ordered the Freestyle Breakfast Crêpe (egg, cheese and ham/Canadian bacon) and I ordered the Biathlon Breakfast Crêpe (egg, bratwurst sausage, diced tomatoes).  However, it has been almost a year since the trip so I could be wrong about who ordered which crêpe. 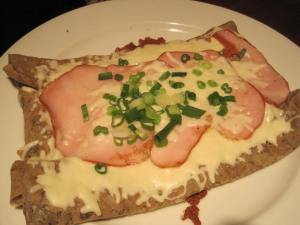 The crêpe tasted good although I am undecided about cheese sauce.  I like melted cheese but a creamy cheese sauce on the crêpe .. hmm… not sure.  On a side note, I was reading Nibbles’ blog and noticed that she was in Whistler for the Victoria Day long weekend.  The seafood crêpe (lunch/dinner menu) that she ordered looks really good.  Maybe next time I go to Whistler….  🙂

4 thoughts on “Weekend in Whistler – Shopping and Crêpes”